It's the next chapter of Kevin's quest to figure out how IRL streaming works! Now, I'm up to ~150 organic concurrents, starting all the way from zero. My past two posts have covered non-content approaches to growing your channel. Today, I'll be covering carefully choosing your content to cater to your channel. I argue that by treating Twitch similar to Tinder, you can grow your channel to ~5k concurrent viewers.

Let's look at some top Tinder tips from Tinder and learn from them.

Viewers should have an immediate first impression and get drawn in at any point in time during the stream. When someone joins, they want to make a decision quickly. Unfortunately, this means slower times and down times tend to churn new viewers.

But that's okay! Don't fret about always being in the action. Unlike Tinder, it's easy to rack up thousands of new impressions per stream, as viewers will organically discover you. Where this does matter is raids: it's important to make a strong first impression with raids. Pay attention to the kind of content and the response you get from a raid. Sometimes, the content will align, perhaps the viewers are predisposed to be interested in your content or perhaps you can appeal to them in the brief moments after the raid. Some of the viewers will stay for the entire stream. With decent content alignment, this is what the viewer graph should look like. 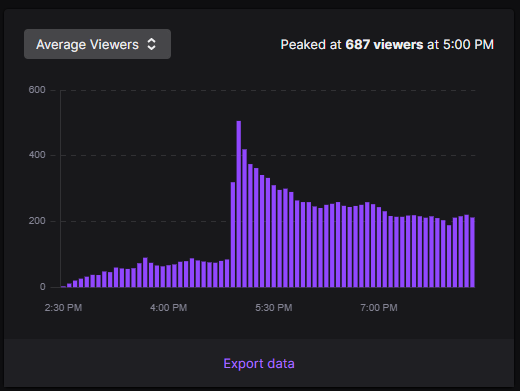 And here's a graph of viewers with bad content alignment. 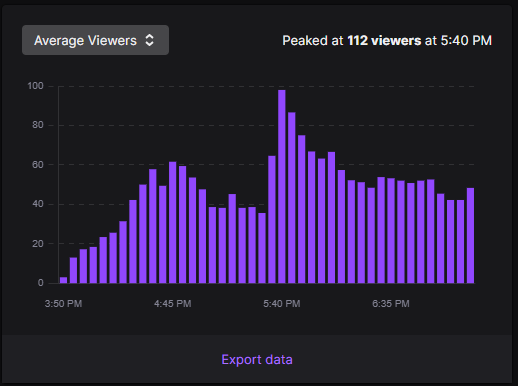 When all of your raiding viewers are lost to attrition, see if there's anything you can change to appeal to them in those first crucial moments. Make a good first impression and make plans quickly.

Tip 2. Put an icebreaker in your profile.

Another way to break the ice is to include interesting photos that spark a reaction.

Some streamers do this by engaging with everyone. For example, I make it a point to try to not miss anyone's message and incorporate them into the discussion. I want everyone to feel like they can belong. This has the effect of sparking a desire to continue conversation.

Be creative and find ways to produce content that gets people to engage with your personality. Big Mux fans will remember the day I got scammed on stream, which caused a huge peak in chatters. 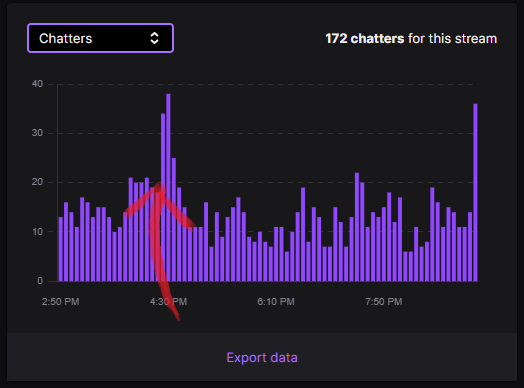 Was it really so bad though? After all, I got 50 new views that I wouldn't have gotten otherwise and I think the event actually showcased my personality too. Turns out, Twitch's algorithm rewards active chatting, so whatever gets people chatting will typically result in a boost in organic traffic. 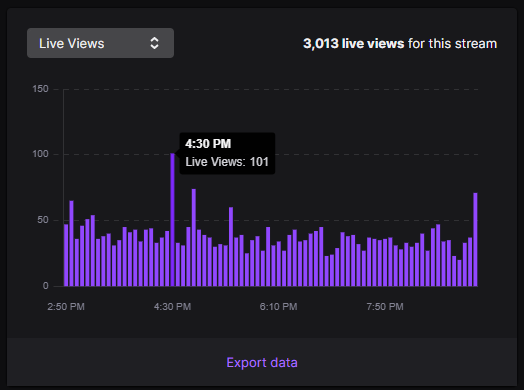 Noone knows what it means, but it's provocative. It gets the people going. Spark that reaction.

Tip 3. Choose photos that are easy to understand.

In the first edition, I covered how category hopping can benefit your stream by giving additional exposure. In the context of approaching content creation like dating, this elucidates the reason more clearly: in a pool of look-a-likes, any sort of diversity is interesting.

Take a look at the tag Permadeath. 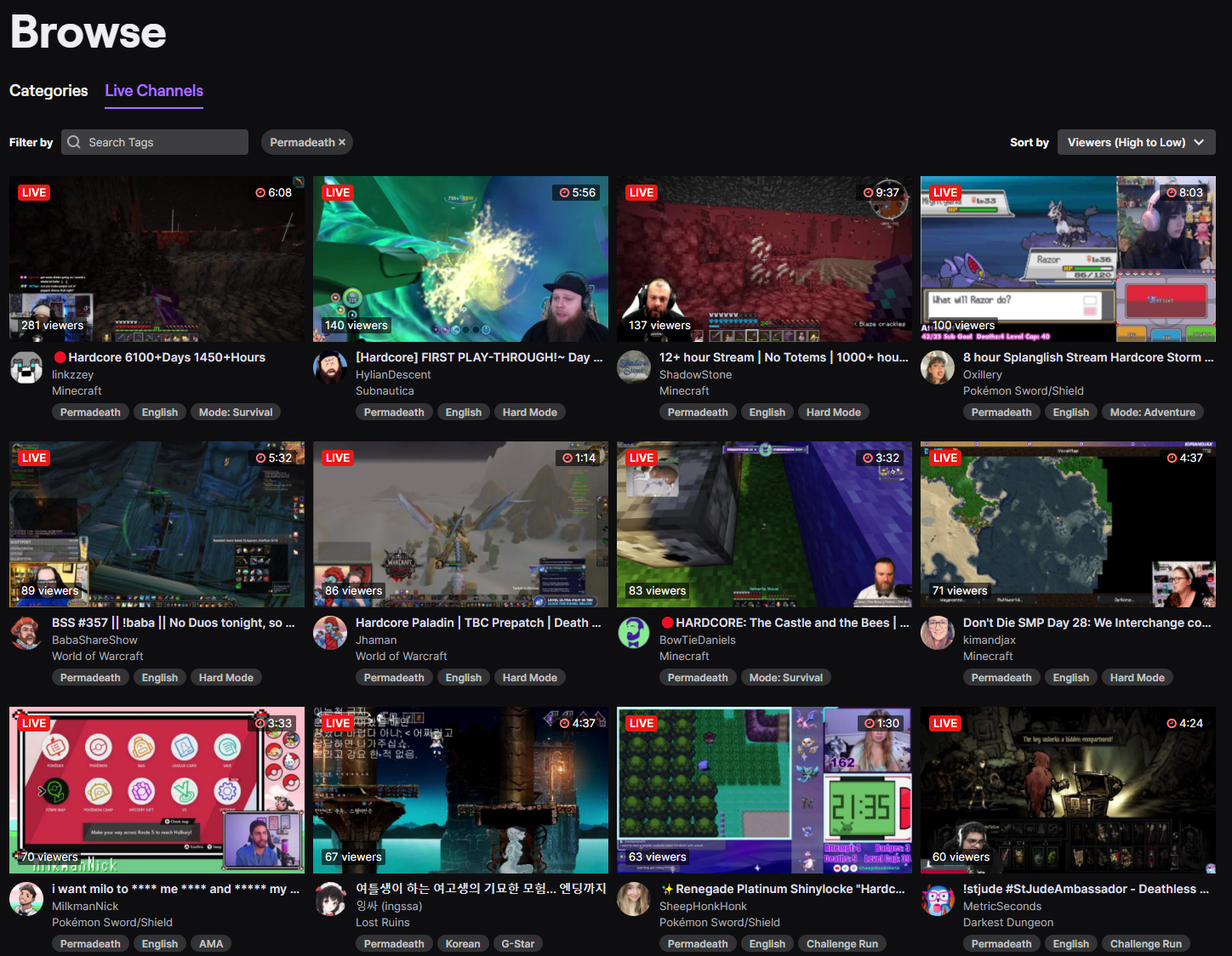 The top "above the fold" content is all gaming: 3D generated worlds. No surprise there, these are all hardcore games that match the tag Permadeath quite well. But if you're an IRL streamer, try tagging your stream with Permadeath. Suddenly, your stream stands out from the crowd. Among the sea of video game streams, you're the only one with a real video. Perhaps most funnily, your stream is the only one that is true Permadeath.

Tinder is packed with people wearing beige, brown, navy, and black, so a bright pop of color, like a red shirt, will catch someone’s eye immediately.

Being different isn't a negative, it's a huge positive. In my personal dating life, this is the hardest obstacle to overcome. I have talked on stream about how people have assumptions about me before hearing me talk and this is very true on dating apps: it's no surprise that an Asian male looks rather generic since it's among the largest share of the global population.

To combat that effect, I need to stand out. My first impression should play my strengths and divert away from my weaknesses. It's no accident that I am not visible for most of my stream. I want your first impression of me to be what I have to say and the beautiful city that I live in.

Choose your content in a way that makes you stand out among the crowd.

Tip 4. Say what you’re looking for in your profile.

I see a lot of streamers get caught up in moderation, trying to police the content on their channel. Meanwhile, I have the complete opposite: essentially no moderation, no rules, and no guidelines. Occasionally I need to intervene, but for the most part it works quite well.

No need to burn yourself out by having to manually filter through all the potential partners who aren’t aligned with what you want. Let them do it themselves!

I believe that this is because I choose discussions that encourage good behavior. I've built a community of people who want to see the content play out, so they police themselves. Pay attention to how your viewers talk about the content you're putting in front of them and try to align what they talk about with how you want your relationships to evolve. The key idea is that by nudging instead of actively policing, it's much more efficient than weeding through misbehaving viewers.

In my ~300 hours of streaming, turns out my one mod has only ever had to ban one user. Not too bad! 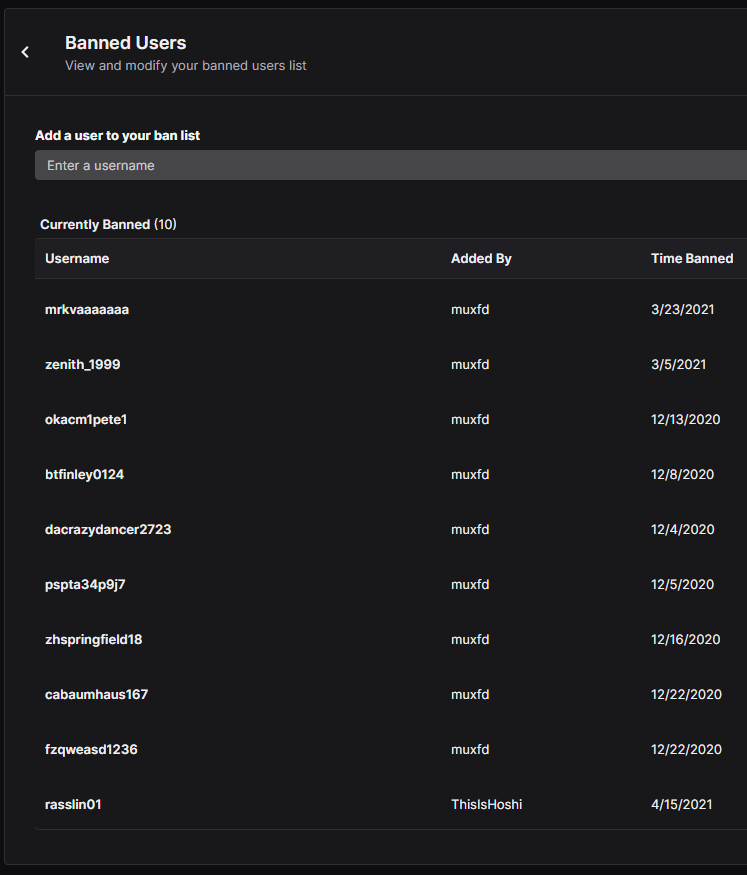 This approach will vary from streamer to streamer. Of course, I realize my channel is a bit of an outlier. Your choice of content may elicit different behavior from people and you may not want to deal with that. But remember that at this stage, every ban is essentially a permanently lost viewer. Perhaps someone, once seeing your potential, wants to behave differently. Maybe they made a mistake or maybe their first impression was misinterpreted.

People can change and I believe in giving viewers a second chance to be a part of the channel. Say what you're looking for on your stream and your audience will follow without lifting a finger. TheRealShooKon3 is a great example of this: every viewer is a mod, effectively making his community a self-moderating channel.

This one is dayparting. Take advantage of the best times to stream.

Tip 6. Be open to meeting more than just an S.O.

Keep an open mind about what kind of content you're willing to stream. For example, am I really a bike streamer? 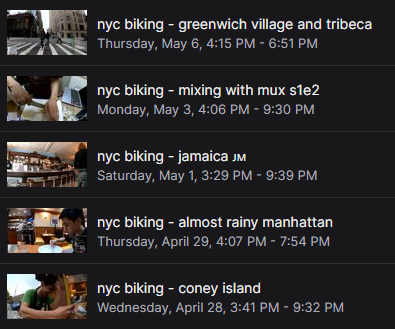 Based on my thumbnails, you might not think so. This is intentional. Don't stick to one type of content too much if you're not traction, explore different content ideas.

Notably, you might think this is at odds with my claim that content doesn't matter. I assert that the best way to grow is for you to believe the content doesn't matter. That is, don't get tied down to any single type of content, let your viewers guide you. Don't stick with a single game if it isn't working. Play different games and be that variety streamer of your dreams.

You can, however, stick to a core principle around your content, much like how most of my streams involve a bicycle. Be open to different kinds of viewers who are interested in different kinds of content. In my time streaming, I've learned that it really doesn't matter what I stream as long as it's unique. But don't try too hard to be unique because it's easy: there's (presumably) only one of you in the world. Attract a diverse audience and remember the same theme as the previous two posts: exposure at all costs.

I think it's no coincidence that these tips from Tinder can apply to Twitch. After all, my stream, if you squint, is just a very efficient way of getting to know me. I want my Twitch profile to represent me myself and let you get to know me as soon as possible.

So it's no surprise that Twitch is similar to Tinder: both are games of efficiently building a relationship. This will grow your channel to the point of not being able to identify individual viewers, which I believe to be at around 5k concurrent viewers. After all, look at some of the biggest streamers. They tend to be very lovable and easy to get to know.

That's not an accident, that's engineered.