Variety Streamers on Twitch: A Fast-Track to Growth

There's something peculiar about the most popular Twitch streamers. Take a look at the top 10 streamers as of today. (source)

Notice any patterns? Perhaps the one that the title hints at? 8/10 of the top streamers stream variety content. Among the top 50, 20 of them are labelled as streaming various games. One explanation for this is that playing one game is boring and gaming skill transfers pretty well, so it's easy to just stream more games. In this post, I'll explore an alternate insight: one that involves how Twitch ranks streams.

One tip I often see r/twitch give to new streamers is to try and find niche games and build a following there. The justification is that it's difficult to be at the top of a category when competing in the more popular ones. Let's consider Just Chatting: 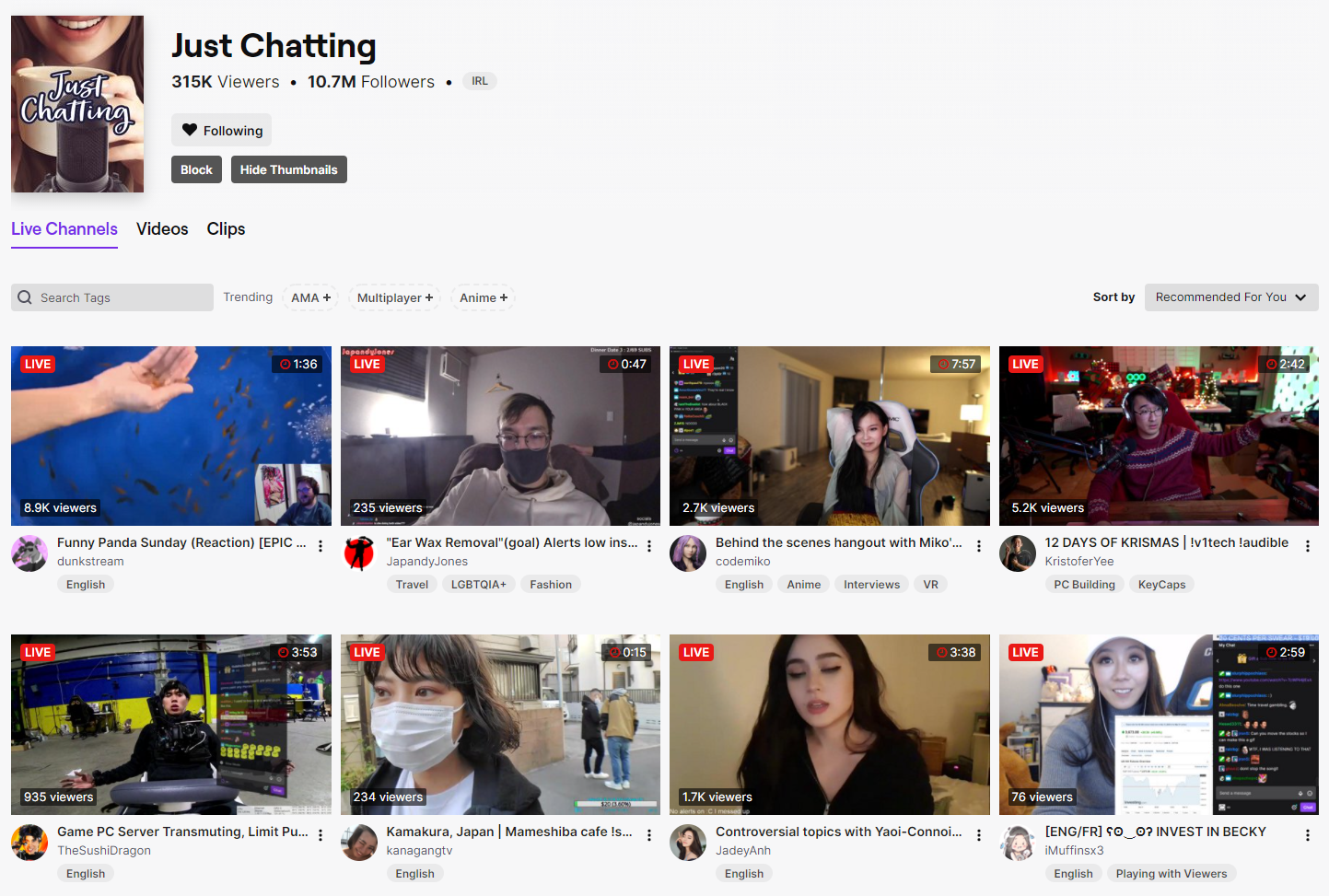 Only one channel with less than 100 concurrent viewers was able to break into "above the fold"! Indeed, in the entire category, there are thousands of streamers. In order for a new streamer to have any chance, they have to be quite lucky in getting new viewers.

Turns out, this actually does happen. Some viewers scroll pretty far below the fold to find those with a low number of viewers, but it's not a particularly reliable way to gather viewers. Instead, consider a much smaller category: Zwift. 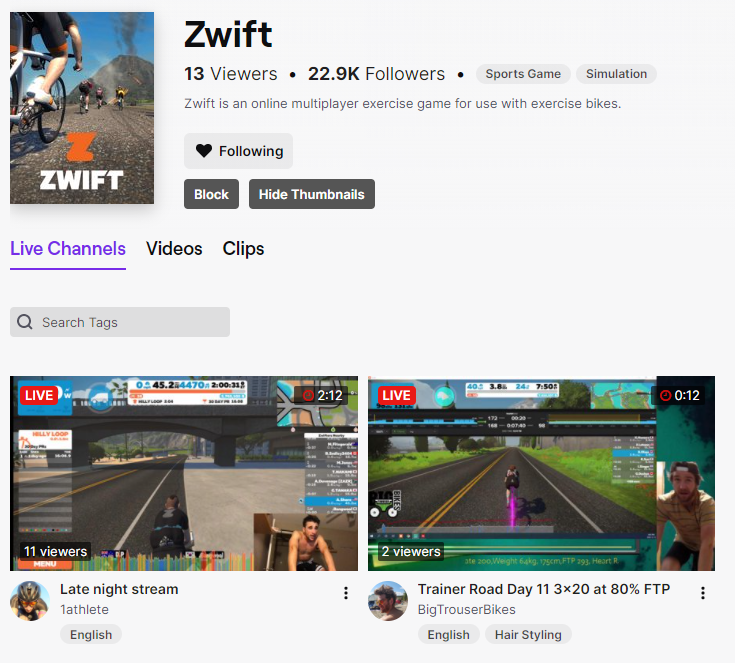 If I stream Zwift, I'm pretty much guaranteed to show up on the front page above the fold. There's only two streamers! So if I start, I'll take up 1/3rd of the category. Now, you might ask, who actually clicks on the Zwift category? It's a super niche game, and many people probably haven't even heard of it. Turns out, 22.9K people are following Zwift and on mobile, it's placed pretty prominently.

And 22.9K people have this tiny game prominently on their home screen, above their followers' channels! I'm by no means a big streamer, but Twitch provides some channel insights. Turns out, about 27% of my viewers come from organic discovery, which at my scale (~10 viewers/stream) pretty much means they came from category discovery.

The mobile-boosting theory is also corroborated by around the same fraction being on mobile, however this might also be due to the ambient population having that platform breakdown. 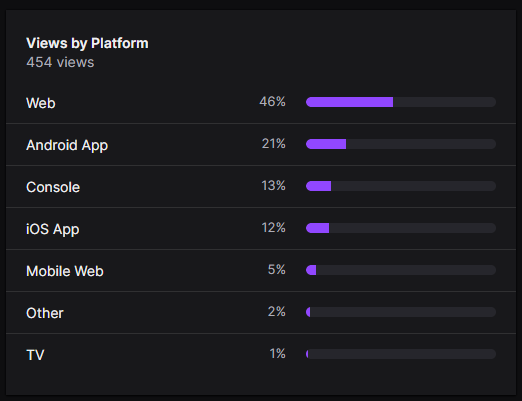 Nevertheless, I hypothesize that it's not a coincidence: mobile viewers are more likely to discover small streamers due to the current Twitch layout. But that's okay! For small streamers, it's much easier to get some amount of traction by streaming to smaller categories.

Growing beyond the category

Now, certainly there's not much of a market if I only stream Zwift. I'd be incredibly lucky to capture all 22.9K followers, but even then that pales in comparison to the millions of followers the top streamers have. To bridge this gap, we look to the second discovery mechanism that Twitch offers: following notifications.

Looking again to my viewer breakdown, 49% of my views are from existing followers.

Especially on web, they're proudly listed at the top left of the page. If someone is following me, I'll likely show up on the top left. Even better, the more viewers I have the higher I show up on the list, so big channels get even more exposure to followers. 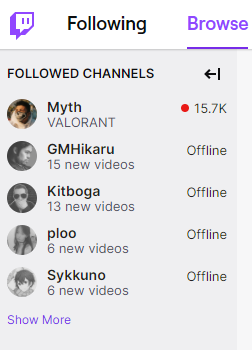 Followers don't care about category. When I click on Myth's channel, I never see what category he's streaming to. Therefore, as a small streamer, if I capture enough of the Zwift "market" and gain some followers, I can jump to another game and capture some more followers, and rinse and repeat. Everyone comes along for the ride. Vertical segmentation!

Turns out, Zwift is a bit of a novelty here. There are actually quite a few categories with a large number of streams but not many viewers or followers. So category choice matters quite a bit. The best channel is the one where I sit above the fold.

Okay, so now you're wondering: I don't want to stream games I don't like to play. That's a totally fair view! The categories for IRL streaming, however, are a bit unique. Unlike video games, it's very possible to fit into multiple categories at once. Let's look at the 14 IRL categories on Twitch. 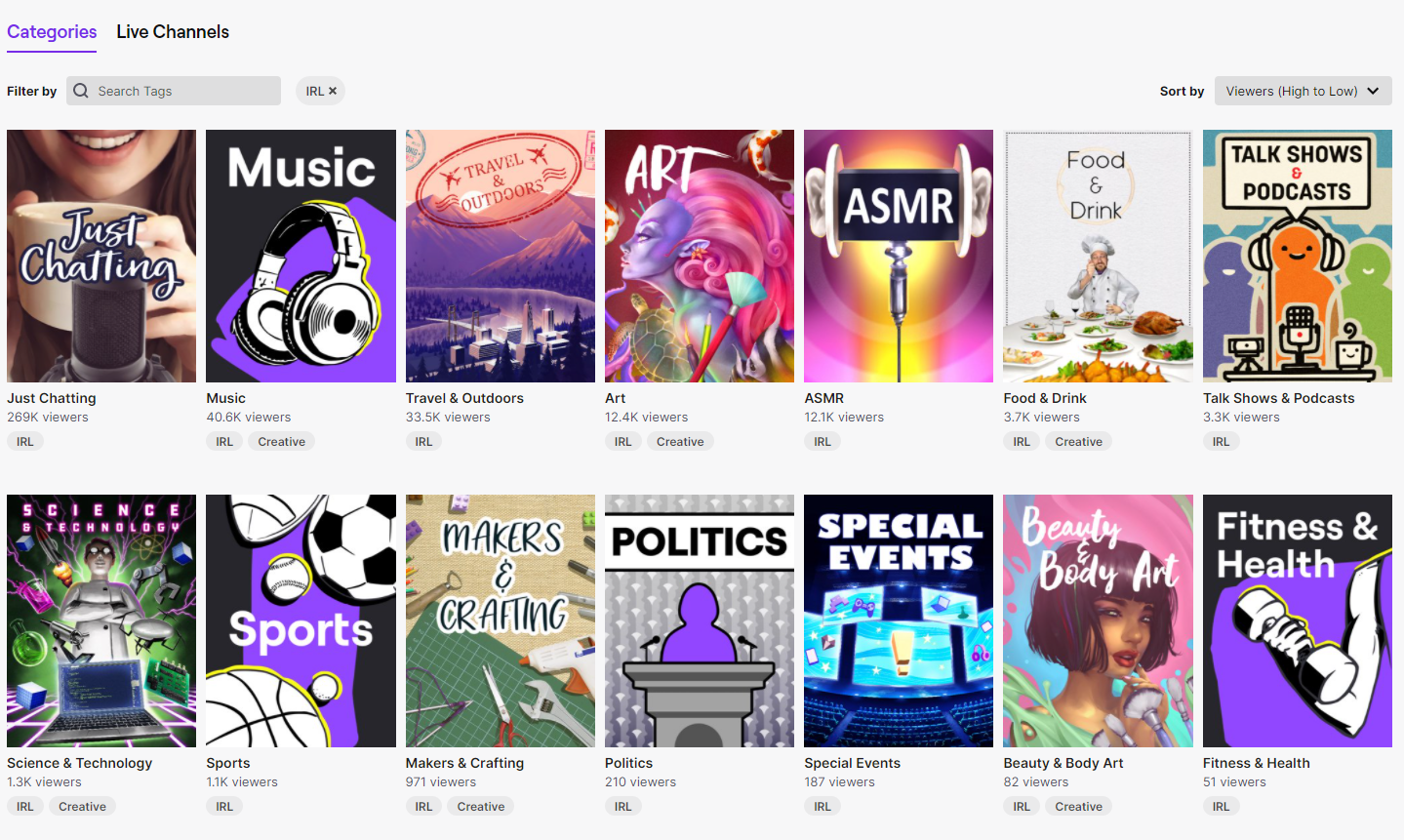 I stream biking. I could easily justify my stream as falling under Fitness & Health, Special Events, Sports, and Travel & Outdoors. Then, when I'm coding, I can definitely justify streaming under Science & Technology, and maybe Makers & Crafting or Talk Shows & Podcasts. In both cases, of course I can stream to the big fish Just Chatting.

So now we arrive at the approach to grow a channel as fast as possible, observing that among the categories I can pick from, my best options are those where I rank at the top. I don't want to compete in Just Chatting, but I can definitely compete in Fitness & Health.

This approach will maximize the number of category followers who will see your channel, increasing the organic discovery rate of your content.

We'll find out! I started streaming a month ago, and only seriously streamed since last week. Fundamentally, this approach exploits the algorithm to increase exposure. Going back to the top streamers all streaming variety content, I have a hunch that streaming variety content not only keeps it more interesting, but also increases exposure as they're able to stream to more categories and get more views, using their follower base to boost them to the top of big categories. For example, if Myth (~1K+ viewers/stream) suddenly started streaming in Science & Technology talking about his gaming setup or really anything, he would probably get a lot of new organic views that Valorant wouldn't provide and a good fraction of them would convert to new followers.

Getting the most eyeballs on your channel will maximize followers. Being an IRL streamer also offers a unique advantage for small streamers too: I can stream snipe someone else in NYC and show up on their stream. This worked pretty well for me with Miekii's stream, I went from 20 followers to 43! For growing a channel, exposure is the name of the game.

Of course, there are other considerations: growing community, engaging viewers, external promotion, and generally talking with everyone helps gain followers. But this approach can be done on top of all of that. After two weeks, I made it to Twitch affiliate! Let's see how long it takes me to get to partner.

Also, a tip going from zero viewers, since zero is always at the bottom: get your friends to join. Even if they join just for a bit, that boost above the fold helps a lot.