It's been about four months since I started my Twitch channel and three months since I discussed how to growth hack the category pages. I'm proud to say that that approach does work pretty well! The effects are quite noticeable and have helped get me to ~30 average concurrent viewers. However, the effects of category hacking for larger channels is less apparent than I had originally thought. In this post, I'll discuss going from a small streamer to a mid-size, ~1k concurrent viewer channel, taking lessons from broadcast television that I've learned since the last post. I argue that at this stage, when you stream is more important than what you stream.

The parting line of Variety Streamers on Twitch is that the key to growth is exposure at all costs. For small and mid-size streamers, raids are likely the greatest source of non-organic exposure. However, in order to be raided, your stream has to be online to be raided! This means that it's actually more important to network with streamers that consistently broadcast at times just before your stream goes online instead of those after. Of course, networking with streams after is a great way to be a member of the community, but I believe that that's a mid to large streamer growth hack. Content for a future post, of course.

Taking a step back, a raid is similar to a TV channel's "next in line" program. When my favorite TV show ends, the channel keeps playing the next one. In essence, this is free advertising for the next show. In broadcast programming, the timeslotting of shows is known as dayparting.

Turns out, Twitch viewership follows approximately the same daily, cyclical viewing pattern as broadcast television, so we can apply lessons from dayparting to Twitch to catalyze our growth.

Counterintuitively, these slots aren't death slots because they don't have viewers, but rather that they're so dominated by existing popular channels that any show that is scheduled for that slot cannot compete for viewership. The same will happen on Twitch too. During these time slots, small to medium size channels have a difficult time competing with large channels, who draw the largest audiences. Check out this viewership graph when I started during a death slot (Tuesday mid-day) and move to an evening slot without raids. 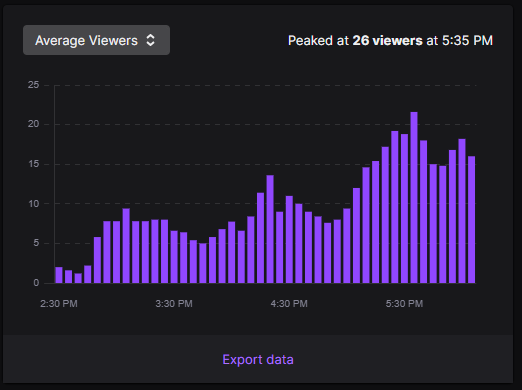 This effect is even more pronounced when I receive raids. The key idea is that streaming right after big streamers, with or without raids, is better than competing with them or streaming before them.

So, we observe that the best time to stream is right after big streamers when viewership is dwindling, but we're not competing with existing programming. How does that affect the content?

In broadcast television, the late night slot is dominated by a specific type of content.

Late-night shows are predominantly targeted toward younger male audiences (college students and people who suffer from insomnia are also a large audience for late night programs) and feature a common format of a male host delivering a stand-up comedy routine (known as a monologue) centered around current events, followed by several guests and a house band's performance.

Luckily, Twitch does not have to be so specific: it's possible to thrive even not catering to younger male audiences. The predominant point though, is that the content will need to cater to the specific audience that views your channel, not the audience that views the popular streamers' channels. Therefore, listen to your viewers. Observe what sorts of content they're interested in and cater to them. This will likely be different from the types of content that mainstream programming likes and it's important to latch onto that.

In my case, turns out my channel has much appeal with international viewers. Streaming weekday afternoons after the 4p timeslot means I drive many evening European viewers who may be interested in exploring New York City. Therefore, anything related to exploration tends to do better than pure talking content.

Much like how late night television observes that its audience is young males, it's important to listen to your audience at this stage. There will likely be a specific demographic that is attracted to your channel. Build on that first and defer the vision of the demographic you wish to target for later.

International Streamers and the Graveyard Slot

All of the above observations are based on the US time schedules, how does that work for international streamers? Unfortunately, Twitch operates pretty much on a US time schedule.

That means that international streamers have to cater to American viewers for growth. Most significantly, this means avoiding the overnight graveyard slot between 2a and 6a. Luckily, it's not as dire as it sounds because Twitch is international, but generally broadcasting in this slot is the opposite extreme: instead of competing for viewership, streamers are broadcasting to minimal audiences.

Incidentally, I have also noticed that there are not many IRL streamers in Europe. I believe that this is because the prime broadcasting slots are times where Europe is dark. 10p in NYC is around 4a in Europe and there is not much to do at night. Similarly, 10p in NYC is around 10a in Japan, perfect time for daylight content when NYC is dark. As IRL streaming becomes more common, I anticipate this will change, but for now, streaming IRL content out of Europe essentially means trying to network with Asia-Pacific streamers for raids and not much else. There is very little organic traffic that can be driven during these time slots.

In the intro, I mentioned that what you stream doesn't matter, however above I have only argued that when you stream does matter. I haven't been able to collect as much evidence around this, but I hypothesize that the content actually doesn't matter so much as long as it's in the roughly correct direction. As long as there's something to watch it's better than nothing to watch. I have been experimenting with this and even the most mundane content is able to find traction with IRL streams. I believe this is due to IRL streams having an implicit character and thus there's a baseline level of content. It doesn't matter what I'm doing because I'm still a part of the show.

This might not be true for non-IRL streams, but I have not found any evidence either way.

A notable exception I have found to the above growth strategy of choosing timeslots wisely is super-niche content channels. Certain channels have content so unique that they're able to attract viewership at all hours of the day. I think the reason for this is because the above analysis is based on US viewership patterns, but when your target viewership doesn't behave the same the dayparted timeslots need to shift to match demand. For example, a channel that only caters to Japanese speakers probably doesn't care much about the US market. 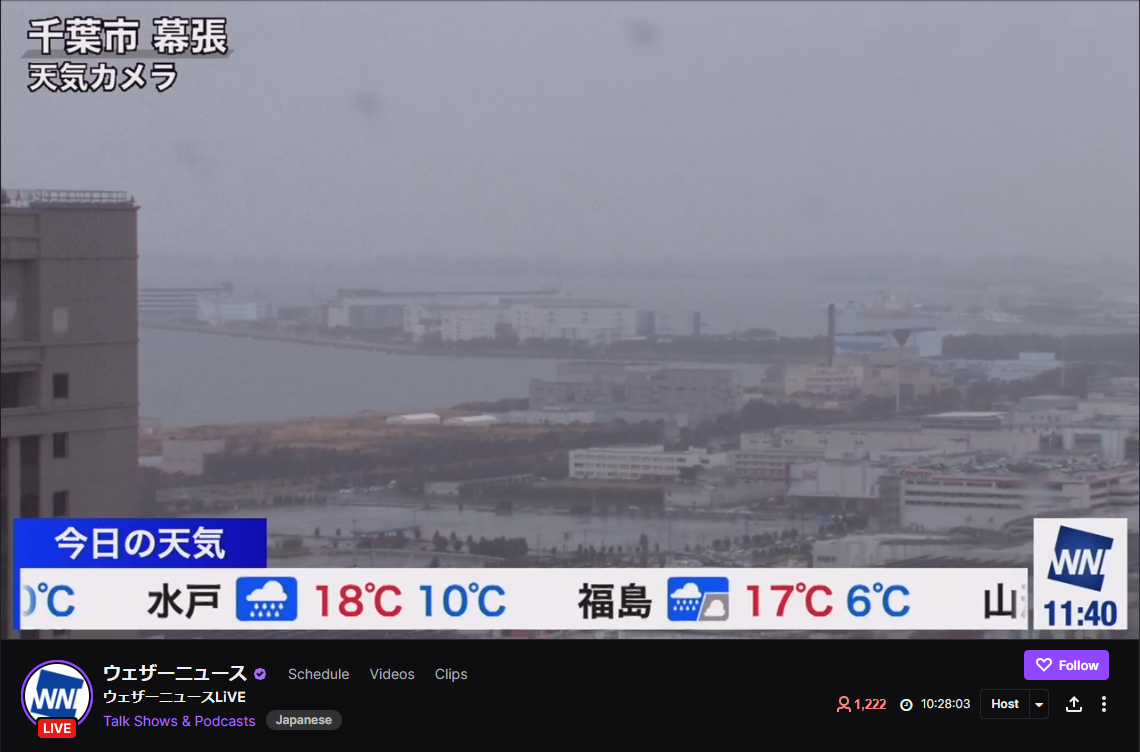 The overarching point that this strategy takes advantage of is don't compete. Competing with big players for viewership will result in worse results than finding your own niche in content or timeslot. At this stage, it's about growing the channel, not finding the perfect content.

Also, there are many other factors that are important to pay attention to: networking with other streamers, engaging with viewers, and leveraging other social media. This post intends to shine light on an understated method of growth that should be used in conjunction with other strategies, not to argue that it's the only path to success. Happy streaming!

Is it time to start caring about the content? Find out how to curate it!