On the Unreasonable Effectiveness of Finite State Machines

Finite state machines are a powerful, but underutilized model for computation. They are the most flexible and "perfect" abstraction of how practical code behaves that I've run across, even moreso than my love of everything-is-a-function. There are more flexible models, such as Turing machines, but finite state machines strike a balance between being overly abstract and being grounded in application.

A finite state machine is a machine that transitions between states, of which there are finitely many.

We'll take this example straight from Wikipedia. A door has two states: open and closed. Transitioning between them is simply opening a closed door or closing an open door.

With these states and transitions, the door can be modeled as a finite state machine. In this example, we don't dictate what opens or closes the door, but we can also specify that too. For example, in an automatically closing door the closing action is simply labeled as an automatic transition.

Now that we have a door, let's implement it. Some tutorials choose to use a library like XState, but I think finite state machines can be implemented more elegantly without any libraries. Moreover, bare-bones implementations get to the real power of such models.

First, declare our states. Each state is represented by a type.

Second, declare our transitions. Each transition is represented by a function.

And that's it! To use this implementation, we can maintain our door as a variable.

Try this on the TypeScript playground.

The door example is simple, however. Practical finite state machines have many more states, transitions, and behaviors. But these can still be modeled with the above pattern. Let's consider an HTML button, which can be modeled with the following diagram. 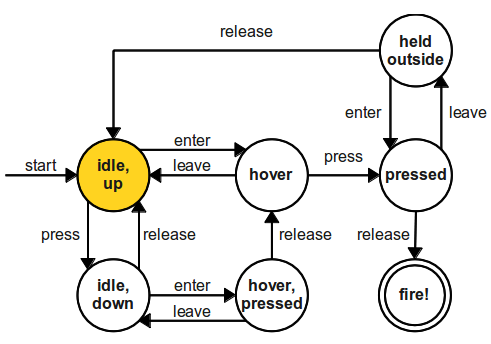 Play around with the behavior here, taking note of how the transitions work.

Using the above framework, first declare our states.

Then declare our transitions. I've omitted leave, press, and release to keep this readable.

Unfortunately, when we try using this implementation, something goes wrong!

What happened here? Sadly, the compiler doesn't know that button is a valid state when it gets passed to leave. There are three ways to solve this problem:

#1 results in a lot of boilerplate but will work and #3 is outside the scope of this post, so I'll focus on #2. In order to not transition if the state is invalid, we adjust the transition so nothing happens if an incorrect state is passed in.

And with that simple change, our code now works.

Lastly, we want to bind our transitions to events.

And we're done! state now tracks the state of the button following the behavior of the state machine. Try it below, view the source with your browser.

Why is this significant?

Another approach to solving #2 would be to use a higher order function called a reducer. This would remove the need for default statements, and might look something like this.

The other cases have been omitted for brevity, but if you're familiar with the direction that frontend development has been going for the last few years, this might seem incredibly familiar. This is no surprise: finite state machines are an incredibly good model for applications. UI development in general has captured a lot of this intuition by decoupling state representation from rendering.

If we take a step back and look again at the button finite state machine as an example, suppose we only look at the subset of states in the red box. 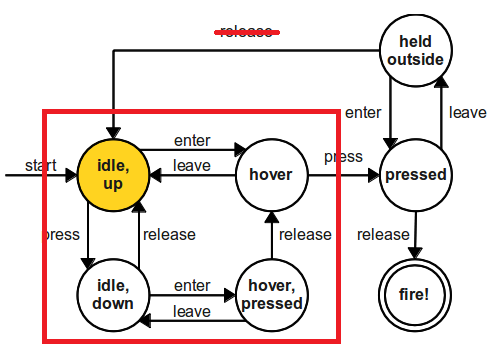 After all, if it runs on a computer, it runs on a finite state machine, so it has to be, fundamentally, a transition between states. That is, in my opinion, unreasonably effective.