Ravi Mehta discusses in a recent post why TikTok has seen growth but Quibi hasn't. He explains that Quibi is missing social connection in its app and concludes that Quibi can address this by making content more shareable and personal. As he summarizes,

While the assertion that Quibi needs to think about itself as a social network is a valid conclusion, the approach that Ravi takes in the article relies on a number of unsupported assumptions and statistical mistakes that result in an overly-narrow conclusion. Quibi can opt to find success through thinking about itself as a social network, but what it ultimately needs is a unique differentiator, not necessarily to become a social platform. If it chases social blindly following Ravi's advice, it's likely it would end up as a YouTube clone.

Let's analyze where the reasoning breaks down and how we can form a more complete perspective.

The key focus of the post is this graph: 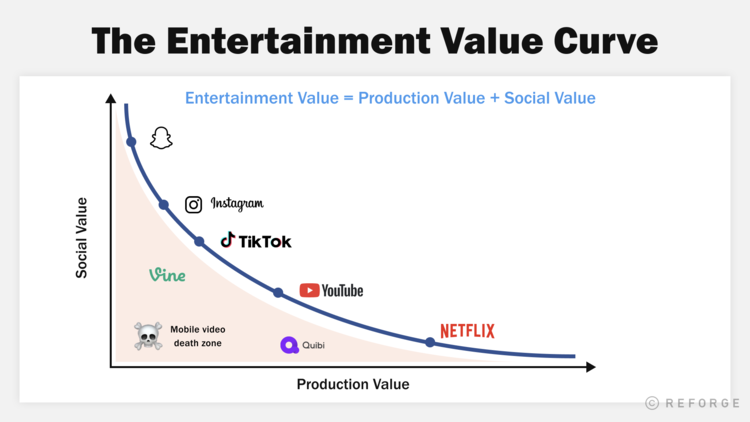 However, looking closer at it, there are a number of fundamental problems.

First, let's look at which variable is actually independent vs dependent. When products choose their strategy, they do not choose production value and let social value "naturally" fall out. Indeed, the post even suggests the opposite: that product strategy should actively choose social value as a focus. So we can imagine that perhaps a better solution is to flip the axes: 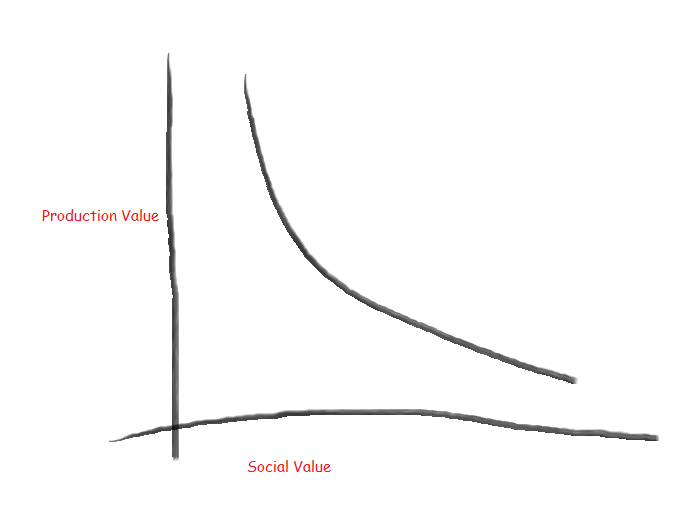 But even this isn't correct, because non-user-generated content sites like Netflix can choose the quality of their content. Indeed, sites like Nebula provide a Netflix level of social value, but slightly lower (non-Hollywood) production value. While maybe the success of Nebula is an open question, its slightly lower production value would indicate that it's doomed to fail according to the model. This conflict also suggests #2, which is that there's no reason to believe that successful products lie on this curve at all.

So what's the fundamental problem here?

The problem is in the assumption of dependence. Pinning successful products to a fixed entertainment value implies that production value and social value are tightly coupled, which leads to nebulous conclusions. Instead of causating them, let's correlate them with a third input: investment of value. This investment may be monetary investment, time investment, or otherwise, but is fundamentally any type of expenditure for the company to trade money or time value for social or production value.

Now, social value and production value are functions of the amount we choose to invest into them. This is naturally intuitive. I can buy a high quality production independent of who I am, and I can invest and expand my social network independent of the content I create. Adding this layer of indirection is subtlely, but significantly different. Now, entertainment value is not fixed (addressing #2) and there is no direct relationship between social value and production value (addressing #1).

The importance of this indirection step also surfaces in how the proposition is interpreted. The original post asserts that:

Quibi made the mistake of thinking that "short" was the feature that people want, whereas "shareable and social" is what people want.

which was true under the previous model, but the new model makes no such designation. Instead, the new model suggests that entertainment value can be increased by investing in either social investment or production investment. The difference, and where the original conclusion appears, is that in Quibi's case, social investment yields a greater return, or put in economic terms, the marginal gains are likely higher for investment into social.

What's the impact on the conclusion?

When considering this approach, we can now look at the final conclusion.

If I were in Quibi's shoes, a few questions come to mind for their present quandary:

Now, let's approach this from an investment return perspective. The above pieces of advice still align, but it's clear it's not the only solution. Namely How might we... create higher production value content? is now a completely valid strategy. And I think it could also work.

Stepping back, the reason this subtle distinction matters is a broader: Quibi's problem is not that it's not social enough. Quibi's problem is that it isn't far enough away from the other points on that graph. Looking at the initial graph, disregarding the actual fit, Quibi isn't located far below the curve in some death zone, Quibi is just too close to Netflix and Netflix completely dominates the high production value regime.

Quibi's design is most similar to Netflix. But Netflix isn't trying to be and doesn't need to be "snackable". Nobody wants Netflix with shorter episodes.

But this is lost in the original thesis.

The company faces a choice. Become more like Netflix or learn from TikTok.

With the expanded model, we assert that becoming more like Netflix is also a death sentence. The company stands to gain much by learning from TikTok, in other words its largest marginal entertainment value gain is through social investment, but ultimately what is important is that it offers a unique value proposition along the entertainment value curve. And this isn't too surprising. What the model shows is that Quibi is too close to existing incumbents in the social value/production value space, so it doesn't provide a unique enough value proposition.

So what Quibi needs is to innovate, find a unique differentiator, and distance itself from Netflix beyond making videos shorter. It can learn from TikTok, but that's not the reason it might fail. In other words, Quibi needs to go this way: 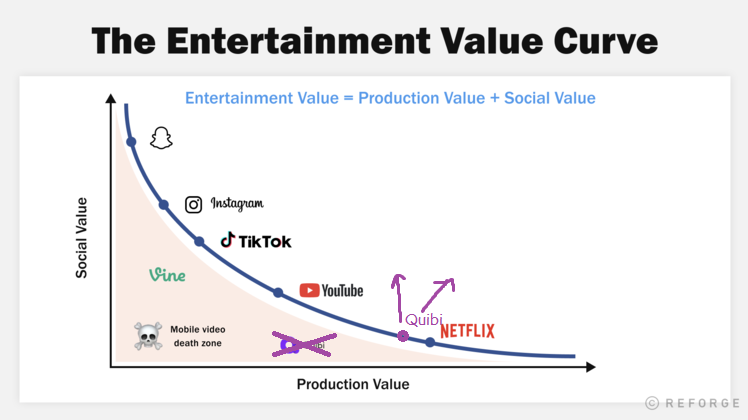